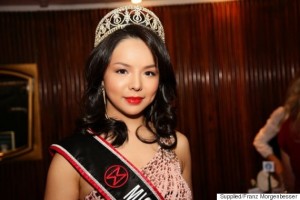 he first became attuned to the issue after acting in a movie called “The Bleeding Edge.” Researching for her role as an imprisoned Falun Gong practitioner, she spent time at the group’s attention-grabbing displays in Toronto’s Chinatown.

“Because the practitioners themselves, some of them have language barriers, cultural barriers, so when they come here they don’t really have a channel to speak to the West about their experiences,” she said.